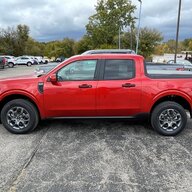 The minimum tow rating on the Ranger is 3500#. It would make sense for Ford to slot the Maverick below that and make the maximum 3500#. I can't fathom that the Maverick would have a lower tow rating than the Escape with same powertrain and a longer wheelbase.

With Maverick production starting in the next few months, when should we expect a reveal?

Sergeant Gearhead said:
With Maverick production starting in the next few months, when should we expect a reveal?

My thoughts are late spring, maybe May. Based on nothing but my own thoughts. haha

With all the news going around of the suppliers being notified I would expect maybe Mid April or the FORD Monthly Investors meeting.

Sergeant Gearhead said:
With Maverick production starting in the next few months, when should we expect a reveal?

ghost1986 said:
Actually now that I think about it yea, they do also make the 2.0 ecoboost in a vehicle with a manual dont they? The Focus ST? I dont think anything in the US uses the 1.5 Dragon with a manual but I know its the new Fiesta ST powerplant so the tooling does already exist for that manual too. Id be so damn excited if they made a 2.0 version of the Maverick with a manual. Neat little street truck with a ton of modability.

For everyone talking about the light dutyness of this truck I mean yea, thats what this is. It was never going to be a legitimate competitor to other trucks on the market and its insane to believe it would. Its a light duty, lifestyle vehicle built on a modified car chassis. It wasnt ever going to have 1000+ pound payload (hell a 4 cylinder Frontier is only good for around 900 pound payload). The tow rating comment does seem odd though. Im expecting tow capacities near the Bronco Sport/Escape. Around the 2k-3.5k range depending on engine choice.
Click to expand...

Totally agree about the light duty thing. We can't clamor for a small truck and also demand it be a mid-sized truck.

As for the Focus, it's got a non-boosted 2.0 liter engine. It's not an ST, it's an SE. I always joke that I got it with the inconvenience package, because it's as bare-bones as I could order back in 2011. Frankly, I'd be pleased with cockpit like this in the Maverick. Basic, with a shifter and no big computer screen.