Sizing Up the 2022 Ford Maverick
Is the Maverick the size of an older Ranger, a Subaru Baja, or something else? Here's how the Maverick compares to pickups old and new.

Normally, when a new car or truck debuts, we don’t think much about dimensions. We don’t need to explain the size of an F-150 because it’s, you know, F-150-sized. But the 2022 Ford Maverick needs a frame of reference, because it has no equivalent in the U.S. market. The whole point is that it’s small (and inexpensive), but what does that mean? We know the Maverick is smaller than the current Ford Ranger, but how does it compare to the fondly remembered 1990s Rangers? Or is this a modern-day Chevy Luv? Let’s take a look.

If you park a Maverick next to a Ford F-350 Tremor 4x4. . .OK, hold on, that’s not a great comparison. The Tremor is more than four feet longer. But, surprisingly, it only stands about a foot taller. And the Tremor is definitely flirting with, “scraping the roof on the way into your garage” height. So, at 68.7 inches tall, our little Maverick is a tall (five-ounce) glass of water.

That height also puts it within two inches of the current Ranger SuperCab 4x2 and makes it 4.4 inches taller than a 1990 Ranger XLT 4WD extended cab short bed. Lest you conclude that the Maverick is just a tall cab atop a low-slung chassis, the all-wheel-drive version’s 8.6 inches of ground clearance splits the difference between the current 4x2 and 4x4 Ranger models, and towers over the 1990 Ranger 4x4’s 6.7 inches of clearance.

When we consider older trucks like that Ranger, it becomes apparent how the use case for pickups has changed over the decades. As trucks morphed from crude beasts of burden to everyday transportation, cabs got bigger and beds shrank. To that point, the 2022 Maverick is about six inches longer than the 1990 Ranger, but its bed is 18 inches shorter. In fact, at 54 inches long, the Maverick’s bed falls roughly between the 41.5-inch box that appended the Subaru Baja and the 61-inch short bed on the 2021 Ranger. (The 1979 Chevy Luv, by the way, offered a 90-inch bed on long-bed versions.) Still, Ford says the Maverick bed will accommodate the industry-standard 4x8 sheets of plywood, if they go on top of the wheelhouses and you set the tailgate to its “propping up plywood” angle.

In terms of overall length, the Maverick is about six inches longer than both the 1990 Ranger and the Baja. And it’s only 11 inches shorter than the 2021 Ranger. So it’s not going to look like a Mini Moke out in the Home Depot parking lot, but it will, barely, be the easiest Ford truck to fit between the lines of a parking space: at 72.6 inches wide (without the mirrors), the Maverick is 0.7 inch narrower than the Ranger. Even the mighty F-350 Tremor is only 7.4 inches wider. If they ever do a Maverick Raptor, that thing might need running lights on the roof of the cab.

If the Maverick isn’t quite a compact-truck throwback in terms of dimensions, it certainly is on the scales. At a claimed 3731 pounds for a 2.0-liter AWD EcoBoost model, the Maverick is about 700 pounds lighter than a crew-cab 4x4 Ranger. In its lightest guise—2.0-liter, front-wheel-drive—the Maverick weighs a claimed 3563 pounds, which is an unheard-of weight for a modern pickup. No, it’s not equaling the 2920 pounds of the Toyota 4x4 we tested back in 1979, but that truck also only had 95 horsepower. We’d guess that the 250-horsepower two-wheel-drive Maverick will be a tire-roaster.

So the Maverick is small in some ways—notably bed length—but it’s wide, tall and lightweight. It can tow as much as 4000 pounds and haul 1500 pounds of payload. And if that bed isn’t long enough for your pickup needs, maybe you can still find a clean Chevy Luv. 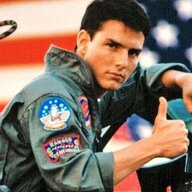 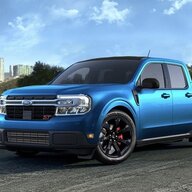 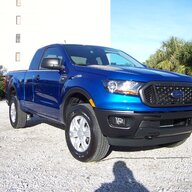 Location
Down South in Dixie

Great info. Thanks. That little truck should sell like hotcakes.
'Better tried by twelve than carried by six."