Vehicle(s)
Too Many Subaru's

If you go to rockauto.com and look at the engine section for a 2020 Escape, it shows replacement parts for a timing belt. So why that video/cartoon shows a chain, in reality it’s a belt.

I sell Fords. Trying to address some of the questions here.
1.5L I3 Ecoboost is similar to 1.0L Ecoboost. 1.5L is chain driven instead of belt, balance shaft is gear driven then attached to the oil pump. Also, only one front cylinder gets deactivated, oil pressure driven cam follower deactivates so that valves don't open and close anymore. Result is better fuel economy, driving around my usual loop which is mostly combined cycle I managed 34mpg according to the trip meter. It is still too early to tell of that's real world number. Also, when that cylinder shuts down, it has some strange vibration to it, especially when you give it a little gas. Still early to tell if this is on par with 1.5L I4 when comes to harshness.

oljackfrost said:
Look more carefully at the text within the video. It specifically says timing chain so there must be more than one version of the engine out there.
Click to expand...

I'll be honest: up until this point, I hadn't watched the video; the webpage showed an icon with the video, but when I clicked on the icon, nothing happened; there was an issue watching the video, so I skipped it.

Since that point, this morning I got the link to work, have since watched the video, and just as you said, there's a metal chain on the engine. No question about it.

On one hand, I highly doubt that someone would fake a promo video of the 1.5L engine, featuring a chain. On the other hand, this is the *only* source which claims that the engine features a chain.

What would be great, FORD, is if someone got on here officially, and cleared up the confusion. Do you really want misinformation out there, on a vehicle which is soon set to launch?

The engine is based on an expansion of the 1.0 EcoBoost, taking the capacity per cylinder up to 500cc which Ford consider is likely to be the maximum for optimum thermal efficiency.[25] The engine is an all-aluminum design with integrated exhaust manifold, low inertia mixed flow turbocharger and combines both port fuel injection and direct fuel injection.

The engine will be available with cylinder deactivation technology, implemented by stopping fuel delivery and valve operation for one of the engine's cylinders in conditions where full capacity is not needed.

That's AWESOME and makes me a little less upset if I do get stuck with a 1.5 instead of the 2.0. Having dual injection like that is generally the solution to carbon build up that occurs in all direct inject engines. The one thing in there I dislike a lot is the cylinder deactivation. I loathe those on any car they're in. They do nothing but cause problems. I know on the Honda V6 theres common options to fully disable the cylinder deactivation because it wreaks havoc on those poor engines over time. Hopefully theres a fix someone figures out for the 1.5 Dragon. Id disable it as soon as could. Right after the engine start/stop of course.

Ans as far as the timing belt versus chain, its a belt in oil. The source that shows a chain in that video isn't related to Ford and is made by a company that does visual presentation media like that. I think its just a simple mistake rendering on their part. Anything Ive ever seen that from Ford or an affiliate says belt in oil. This is all assuming were discussing the current 1.5 Dragon used in those applications above. They COULD change it I guess but Im not sure why they'd go through the effort.
Last edited: Mar 20, 2021

I went and searched out what is involved in changing the timing belt on the 1.5 engine and it is pretty involved. Nice and easy if the engine is out of the vehicle but inside I see lots of $$$$$$ that will be charged to do it. It requires a special "fixture" to lock the two cams before you take the belt off. 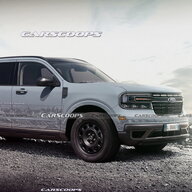 I just finished returning a rental chevy with a 1.3T 3cyl, and man was that thing rough at high revs, it felt like the engine was gonna fall apart, it had good torque at low speeds, but the tranny bogged it down, it had go kart characteristics, which I'd want in a mini CUV, but idk about a pick up truck...I'll be expecting a lot from the 1.5L, otherwise it might have to be 2.0 for me

Especially if the 1.5 can handle a car full of people and suitcases

Thats also basically a Daewoo engine in the chevy. Lol. The Ford 3 cylinders arent bad form my experience. I test drove a manual Fiesta with the 1.0 ecoboost and it was quite a potent little three pot. I would have bought it but it was sadly a sedan model. Could never find one in hatchback form locally and I wouldnt ever buy a sedan that small. The Ecoboost line is a far superior line compared to Chevys small turbo offerings. I dont even give the Chevys a second glance most of the time. They wouldnt even be in the realm of options for me.

Im also hoping to be able to get the 2.0 but I wont go up to any trim filled with useless goodies just to get it. If being stuck with the 1.5 means I can avoid auto climate control, blind spot montioring and all those extra sensors then Im all in for the 1.5. Haha.

ghost1986 said:
The Ford 3 cylinders arent bad form my experience. I test drove a manual Fiesta with the 1.0 ecoboost and it was quite a potent little three pot.
Click to expand...

I'm curious if anyone else has experience with driving the 3 cylinder engines. I've always thought 3 cylinders were a little weird and would be prone to vibration. Of course with the deactivation on one cylinder it would almost be like a parallel twin.